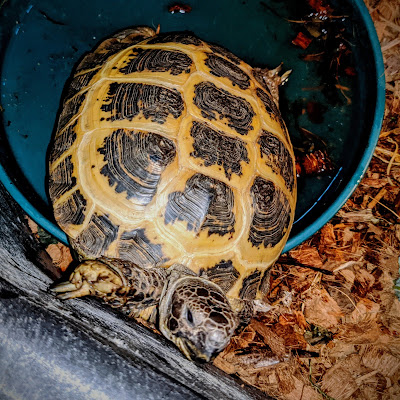 All of my tortoises behave differently, on their own, around each other, and in response to my presence. It only makes sense, they're not machines, they're bound to each have at least slightly different reactions to stimuli. I work hard not to anthropomorphize their behaviors, or to force my interpretations onto the things they do.

I don't cuddle with my tortoises, I mostly feed and soak and inspect and care for them, and we leave each other mostly alone... I've assumed that that's how we all wanted it. I play the role of food god, or delivery boy, and they mostly ignore me, except Darwin, who's always spent a lot of her days watching me write.

That's why it was such a surprise yesterday and again today when Persephone, a Russian rescue from Virginia, kept making and maintaining eye-contact and coming over to initiate and seemingly enjoy physical contact. I first noticed her looking at me whenever I peeked over the rim of the stock tank that she and her roommate Wilhelmina live in; after the first few times, I stayed around and even lowered my hand into the tank.

She came over and I anticipated a nip, which I've gotten from Chili a number of times before due (I think) to his territorial nature and perception of me as being interested in taking his mates from him; she didn't nip, only sniffed. After sniffing me for a bit, she turned a quarter of the way around and lifted her shell up to where my fingers were, and bonked her shell against them.

I took some initiative and gave her shell a rub, at which she scuttled away a few inches before turning around and coming back over to check me out again. I gave her more scritches on her shell and this time she seemed more comfortable with the contact and allowed it to continue for about ten seconds before leaving.

Since then, I've checked back in a couple of times and each time she's looking for/at me as soon as my head clears the edge of her stock tank, and she comes over for scratches. It's not a food or a warmth thing, as there's plenty of food and warmth in the tank for her; her roommate Wilhelmina has shown no interest in being scratched (so I don't).

As I'm writing this, I can hear her nails on the wall of the stock tank at the edge closest to me and my desk, where I last scratched her, scrabbling gently every few minutes as if to remind me that she's there, waiting... again, I'm trying not to ascribe human emotions to her behaviors, but she's coming off as a bit needy now that she's learned I'm willing to give her some physical attention.

I may try to devise a brush mounting for the side of her tank so that she can scratch her own shell whenever she wants, but a part of me wonders if that's avoiding the larger issue... if now that I've opened up a line of communication along these lines with Persephone, altered our relationship, taken it to the next level, if I have a responsibility to maintain the status quo or find a way to "break up" with her (imagining an "it's not you, it's me" conversation with my rescue tortoise, and how the humans in my life would describe my behaviors to the residential facility they packed me off to).

At any rate, I find the evolution of my relationship with my creep fascinating....