Behavioral enrichment for the creep

Behavioral enrichment (also referred to as environmental enrichment) is an animal husbandry principle that seeks to enhance the quality of captive animal care by identifying and providing the environmental stimuli necessary for optimal psychological and physiological well-being.[1]

When I was a kid in NYC, the Central Park Zoo had a lovely collection of sad and unhealthy animals living in what were essentially jail cells; I remember the tiger and bear and gorilla all pacing back and forth in their concrete and iron box, the repetition of their actions, and even their paths, day after day wearing shiny grooves in the rough floor.
The change in thought about how we keep animals, and how we could improve their lives as our guests, our captives, was slow to come to the world of zoos. Even today, although people don't hesitate to provide enrichment for the dogs in their lives, don't feel the need to justify providing enrichment for their cats, the habitats of reptiles are still too often just boxes and kibble that meet the minimum needs of survival, without looking at how we can help them thrive. 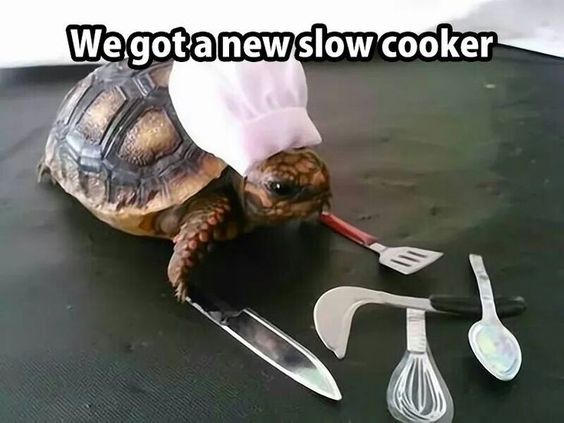 Every captive animal benefits from enrichment. While I don't sign the tortoises I live with up for cooking lessons, I do work at finding ways to stimulate them with the aim of improving their psychological and physiological well-being.

Providing for their basic needs must come first, and it was only after I felt confident about being able to give them the heat and humidity and light and food that they need to survive that I began to think about how I could improve their lives and mental and physical well-being through behavioral enrichment.

I'm going to discuss a few of the areas and ways in which I provide stimuli for the tortoises that I live with... I'm certain there are other ways, some I'll discover as I go along, others I'll hear about people sharing their successes.

In the Indoors Enclosure

The first four of these are tactile, having to do with the tortoises' sense of touch; the four after that have to do with food, feeding, and hunting. 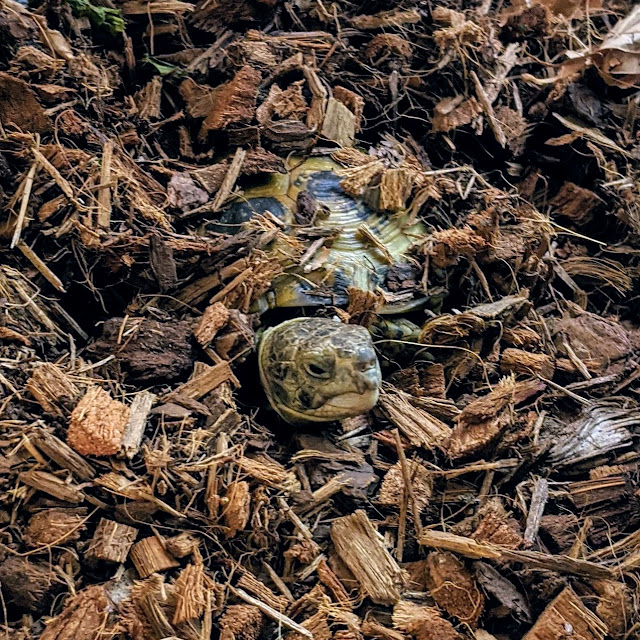 You could probably get by with an inch or two of substrate in an enclosure, but your tortoises will be much happier with more. I found this out when I noted that Chili, an old Russian male I rescued a few years ago, liked to dig into his substrate. In his previous life, Chili lived on a thin layer of rabbit pellets (that's how lots of people used to do it); once he came to live with me I made the substrate in his enclosure progressively deeper and deeper until now he often disappears, tunneling through the coconut husk and cypress mulch, sometimes unseen by me for days at a time. 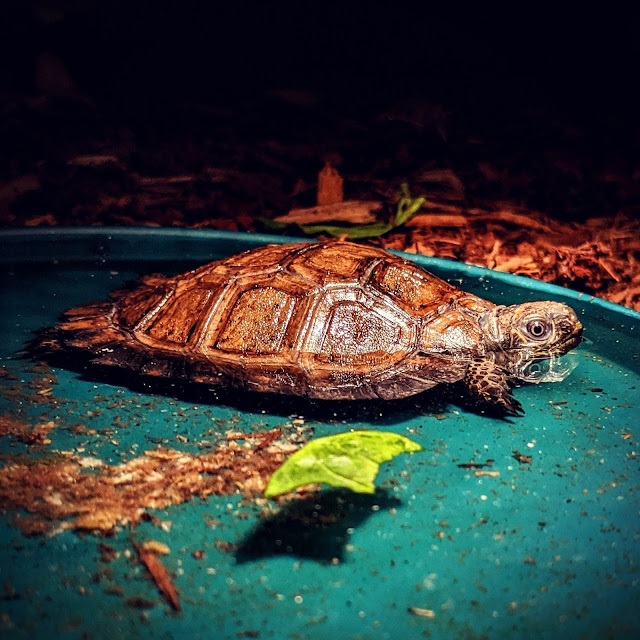 I use plastic underpots as waterbowls in my tortoise enclosures, big enough that the tortoises can climb in and soak themselves if they want to; the surprising thing is that they do, even the dry-country species like the Russians I live with, I've seen all of them climb in and splash around at one point or another. Aretha, a Black Mountain Tortoise, is picture above, and she spends a good chunk of every day in her pool, watching the world around her. It's more than they need, but I believe they enjoy the feel of the water on their shells and legs, and in sticking their under the water to drink from the bottom of the pool. 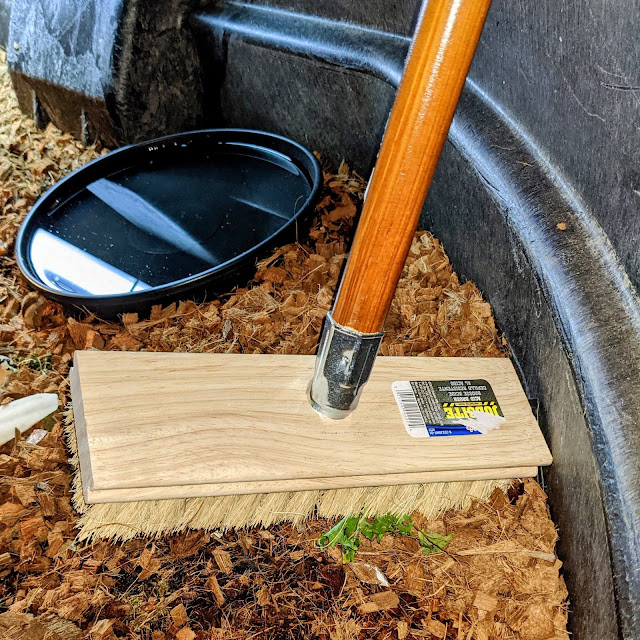 At every zoo I've ever visited, I've seen animals scratching themselves against a wall or branch or edge in their enclosure; I added a stiff brush to the enclosure in which three female Russian Tortoises live, and within minutes the queen, Persephone, came over and began experimenting with different parts of her shell and the brush. I chose a boar's hair brush over plastic just in case they decide to eat the bristles, figuring that it'd be easier on their digestive tract. From my desk, where I'm writing this, I can hear one of the ladies availing herself of the scratching post. 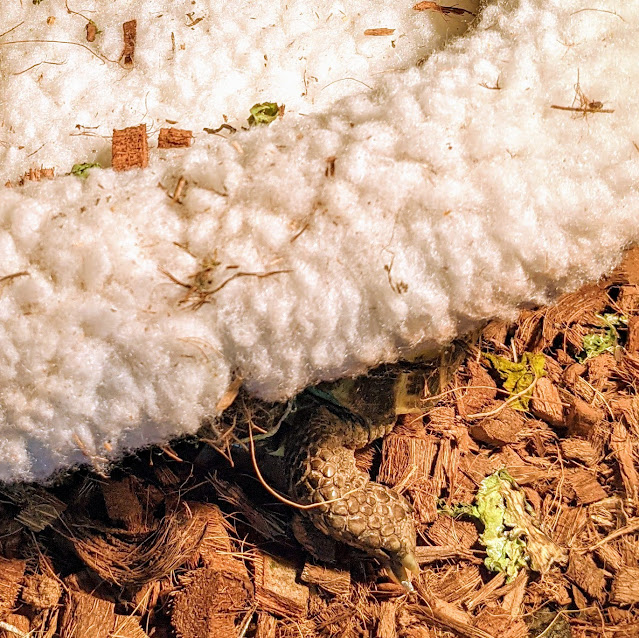 I read about this online, and saw a number of people posting pictures of this phenomenon before it seemed worth giving it a try. I think in much the same way that the brush stimulates them, the fleece cat beds do too, but with softness instead of bristles. Since adding one to a few of the enclosures, I've seen the tortoises laying on it too often for it to just be chance. They also push and drag it around the enclosure, and as can be seen in the photo above, often hide underneath it, sometimes while moving it from one side of the enclosure to the other. 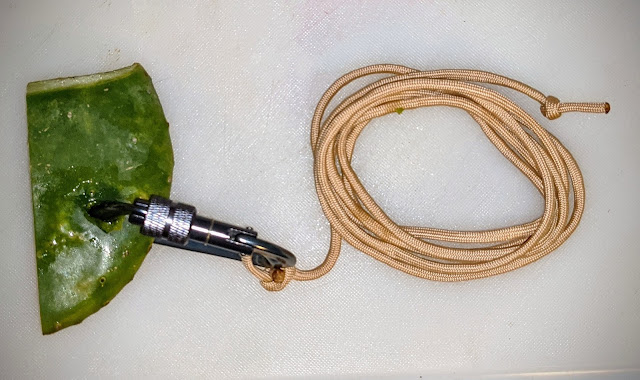 All tortoises can eat opuntia cactus leaves, but you could certainly use another food item for this enrichment activity. I mount the food item on a carabiner with paracord tied to it, so that I can hang it just off the floor of the tortoise's enclosure. An appealing food item will certainly be a rapid draw, but I've seen them come over for lettuce and squash. The movement and interactivity of the trapeze feeding station invigorates tortoises, in my experience, and as a side-benefit the food isn't trampled or dragged into the waterbowl. 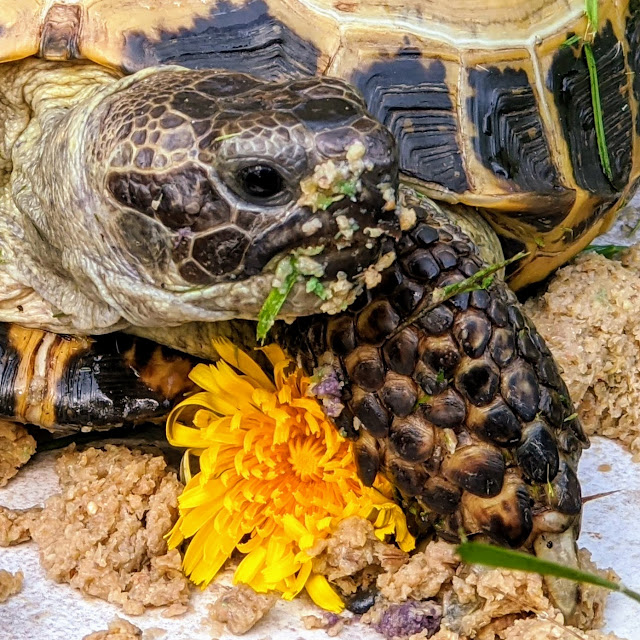 All of my tortoises love dandelions, and in the warm months, when the flowers are plentiful, I will often scatter them all over the enclosures, forcing (inviting?) the tortoises to hunt for the treats. It's healthful and stimulating for them to walk all over their enclosures, looking for, smelling for, their food. 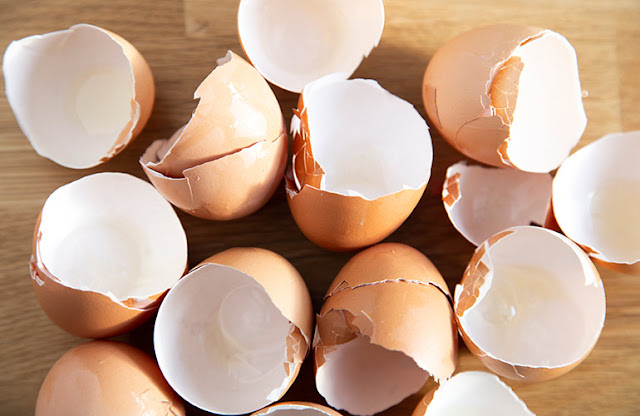 I generally supplement my tortoises' food with calcium in the form of powdered eggshell over their greens once or twice a week, but at least as often, I'll chuck some whole shells into the enclosures. When not powdered by my food-ninja, the calcium uptake is vastly reduced, but the tortoises still have fun: carrying them around, nibbling and crunching noisily, rolling them around the enclosures. On occasion I'll stuff their food into eggshells so that they have to get it out of them before they can eat. 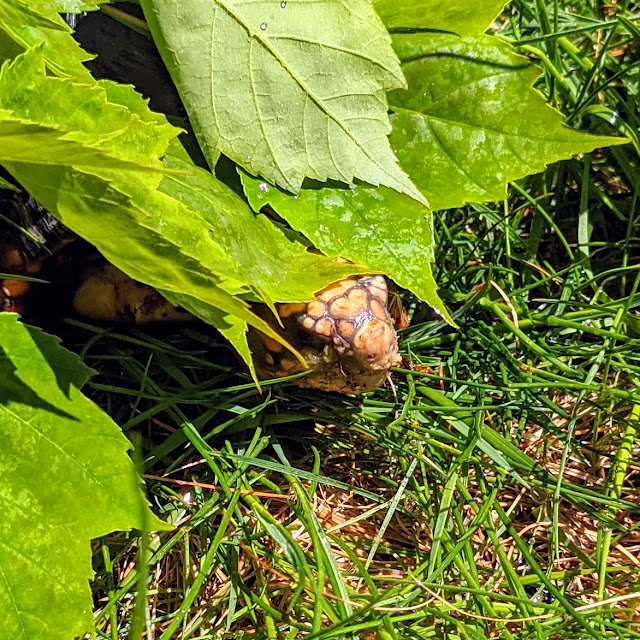 From spring through fall (including after the leaves have changed colors) I'll chop maple and birch branches from the trees in our woods and put the leafy branches into the tortoises enclosures. They quickly explore the additions, climbing on and under them, nibbling them, dragging them all over. The leaves are generally stripped within a few days or a week, and then I just chuck the sticks outside for nature to compost.

In the Outdoors Enclosure

I'm lucky to live in a place where it gets warm enough for a few months a year for my tortoises to get outside on nice days, and I try to take advantage of that whenever I can. The real sunlight, breezes, occasional rain, diversity of plant life, slow moving cricket or worm that becomes a snack, all of these things are gold for tortoises that live most of the lives inside.

Beyond the natural world's stimuli, I try to encourage the following to help pack those field-trips with goodness for the tortoises. 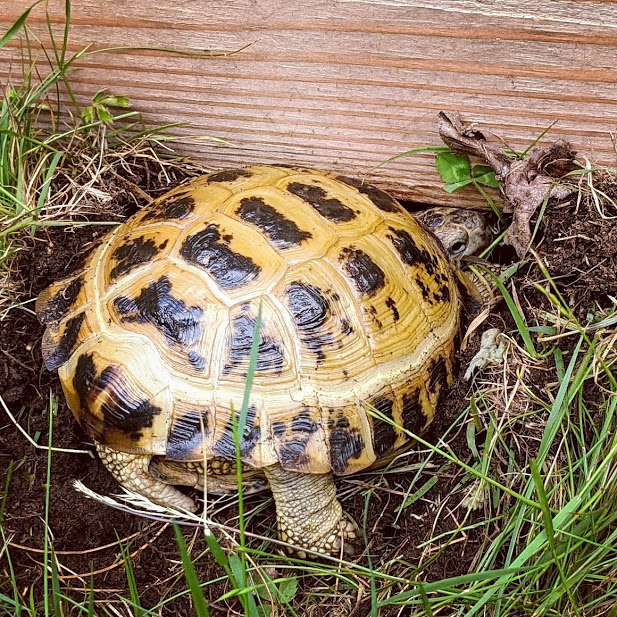 Russian Tortoises love to dig... love it. I try to indulge them in as safe a way as I can, while not allowing them to escape and get lost in the wilds of New Hampshire. I found the balance between encouraging and discouraging them lies in lining the outside of the wooden-board enclosures I make for them with paving stones on the outside; in this way, if they're able to dig out between my frequent check-ins, they'd still find themselves under a stone, and would have to dig a further 8 inches before they could make a break for freedom. 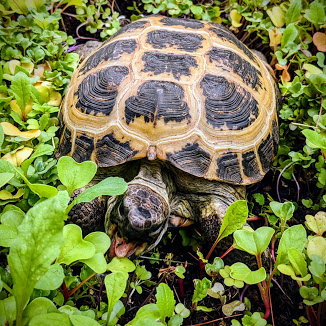 In the spring I plant a 4X4 raised bed with microgreens and keep replanting it through the summer. I harvest handfuls at a time for the tortoises on days when they cannot get out, but on days they can, I rotate them through the raised bed for a bit of buffet-line grazing. I hose the bed down after each tortoise, and only let one visit each day to minimize the risk of cross-infection of parasites between them (and of course, I don't include new additions under quarantine in the rotation). 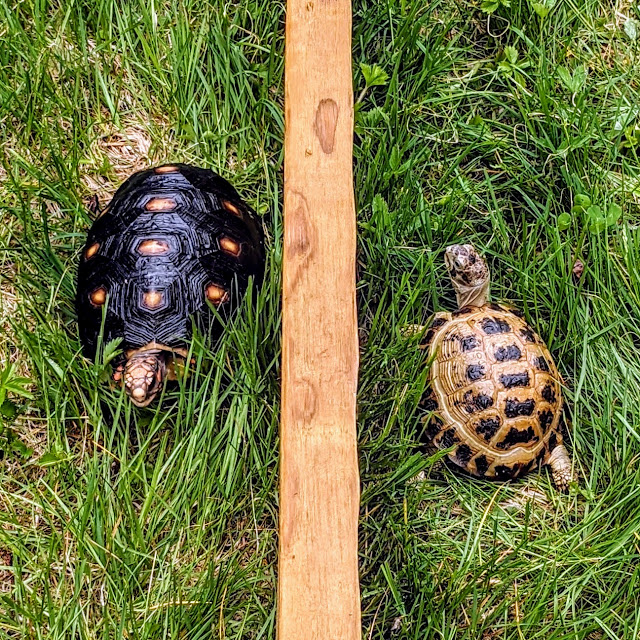 Tortoise have a good sense of smell, and when they're all outside in their separate enclosures, they can smell each other, and spend a fair amount of time jogging back and forth along the borders. When they get outside and see and smell the rest of the world, along with their neighbors, you can see their eyes brighten, see them stand a bit taller, see them walk with a greater sense of purpose.

A few of the enrichment activities I use with the tortoises, work both inside and outside. 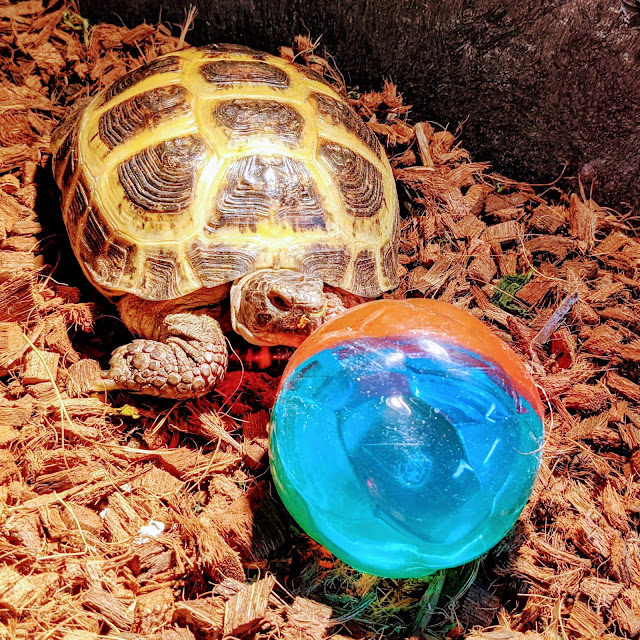 A ball to play with

I found that a colorful ball in either the inside or outside enclosure will always, eventually get some attention by the tortoises. Sometimes they push it around, sometimes they try to eat it (which is why I get a tough KONG ball too big for them to fit any part of inside their mouth), sometimes they bonk into it like it's an invader. 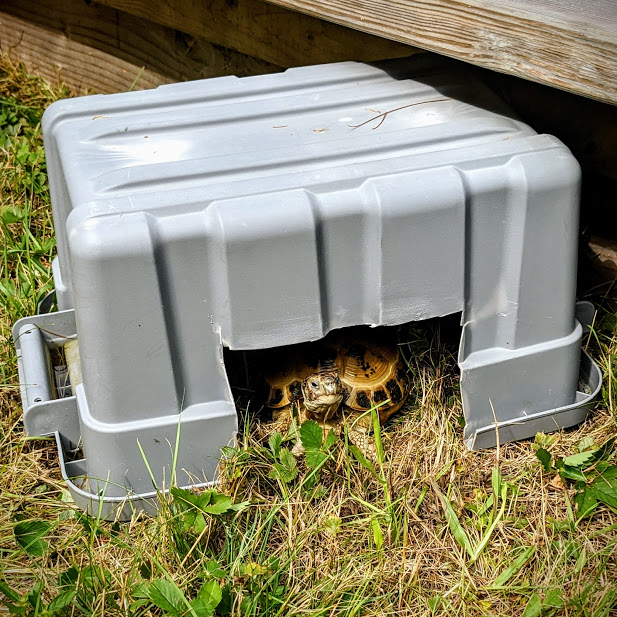 A place to hide, from the sun or from me or from the other tortoises, is always a good thing, and there's no such thing as too many hides. I periodically move the hides in the enclosures, inside and outside, around, which lets them rediscover their home and re-map the safe spots for themselves. 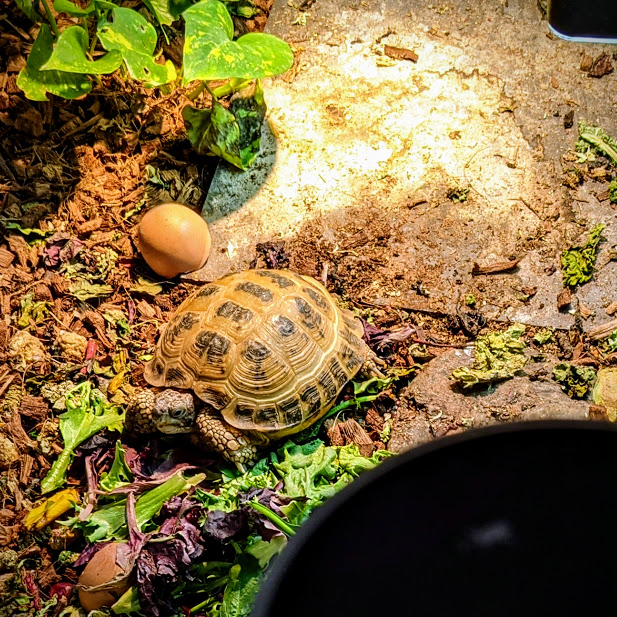 Speakers, and other sounds

I can see it because I took the picture, but the dark blob in the lower right hand corner is a speaker that I have set up in the middle of the inside enclosures. I have a SPOTIFY playlist that includes rainstorms, waterfalls, streams, crashing surf, jungle noises, and the like. I'll sometimes play it for the tortoises, when I'm about to head out grocery shopping or on some similar errand (as it's not my favorite music).

In the warm months, one of the items that I use to make a shady spot in my outside enclosures are a few pieces of tin roof, and they make a great sound when it starts to rain... it's great to see the torts react to the rain coming down on them when they're in the outside enclosures.

I certainly don't think you need to enact all of these forms of enrichment for your tortoises, it might well be too much for them. Instead, I would suggest that you consider the tortoises that you live with, who live with you, and think about one thing, or a couple of things, that you could do to increase their level of stimulation periodically, to enhance and improve their psychological and physiological well-being... to enrich their lives.

Try something, or a couple of somethings, and see what a difference it makes in their lives; I think you'll be glad you did.