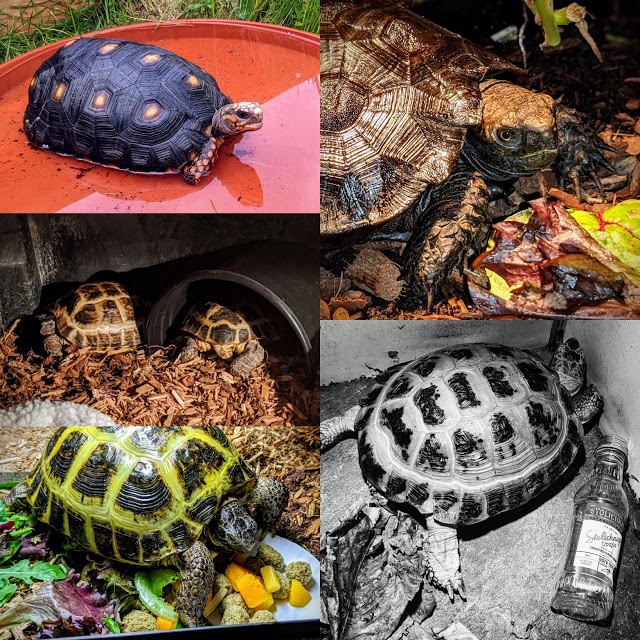 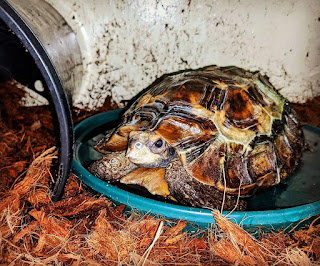 The Uber-Creep
I haven't always lived with tortoises (although some would argue I've always been a creep, even on my own), but the last few it went from zero to six (which is about the maximum I want to live with, as I think that beyond that number the level of care to individual torts might suffer). 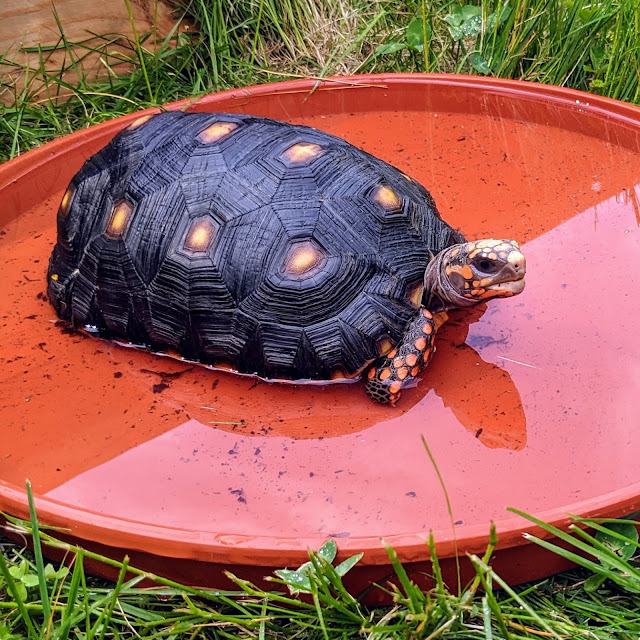 Darwin, a Redfoot Tortoise, was the first to come and live with me. She came from Florida via FedEx; she arrived the size of a squash ball and has grown to the size of a loaf of bread (a 34-fold increase in weight) in our 2.5 years together.
Redfoots are sociable, lovely, and relatively easy to care for Tortoises that originate in South America. I choose this breed as my first because I was intimidated by the concept of hibernating my tortoise through the long New Hampshire winters (this proved a baseless worry, as my Russian all could hibernate but don't, and they're fine). Redfoots are omnivorous, and obviously, Darwin likes to eat everything. She prefers a warm and humid environment, so in my neck of the woods, a closed vivarium is the way to go. 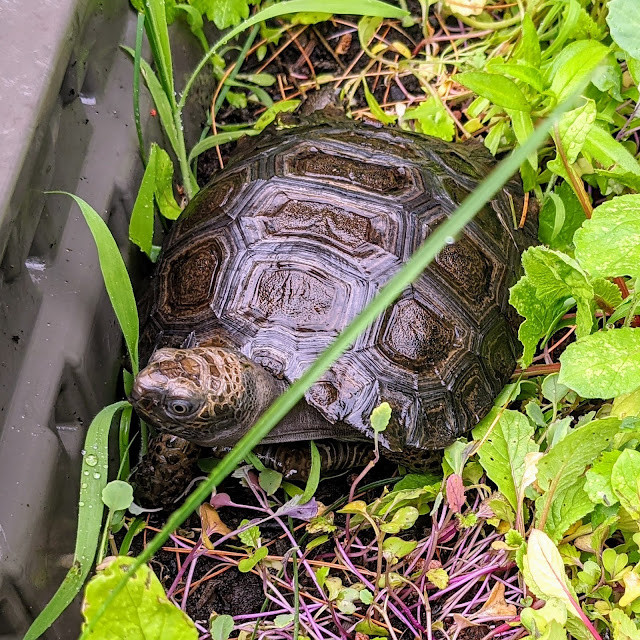 Aretha, a Black Mountain Tortoise, was actually the third tortoise to come and live with me, but I'll talk about her next so that I can discuss the Russians as a unit as well as individually. Like Darwin, Aretha came to me from Florida via FedEx (from the same dealer, Redfoot Ranch, who was wonderful to work with and sent me beautiful and healthy specimens. Although she'll like end up larger than Darwin, Aretha has grown more slowly than her creep-mate in our two years together.
Black Mountain Tortoises originate in Southeast Asia, mostly in Myanmar (which I will always think of as Burma) and Thailand. They're a lovely and interesting breed that has been around unchanged longer than almost any other tortoise on earth, which is what drew me to her. She's also an omnivorous forest tortoise, with a preference for a slightly more humid and slightly cooled environment than Darwin. When she was younger, she would bury herself for days at a time in her enclosure, my only proof that she was still there the empty food dish every day (Darwin, on the other hand, doesn't dig at all). 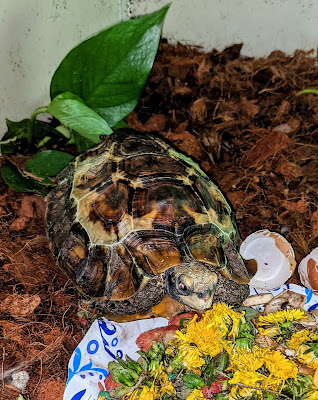 Deirdre
I drove down to Danbury, CT, to pick up this rescue tort, a hingeback, this morning. She weighs 1477g and is 19.0 cm in length. She's got some shell fungus and a pretty funky shell, both likely from sub-standard conditions in her previous life. While giving her a bath and inspection and rubdown with athlete's foot cream (for the fungus), she laid two eggs, which settled the debate as to her sex.
Homes Hingeback tortoises (Kinixys homeana) come from moist swamps ad lowland forests in Central Africa. In many ways, they're more like box turtles than other tortoises (omnivorous and semi-aquatic), and are like other hingebacks, are threatened throughout their range as bush-meat and fodder for the pet-trade.
The Russian Sub-Creep
I lucked into my Russians entirely (well, almost entirely) by accident. I was looking online, searching Craigslist, for a larger enclosure for Darwin when I saw an "ad" for a Russian Tortoise. The owner was pretty close, I had the space and time and money, and I had loved getting to know Darwin, so I took the plunge. One thing led to another, and now I live with four of these wonderful tortoises. My hope is that when the warm weather comes, and they can move back out into the outside enclosures, they will get along nicely and breed and eventually the females will lay some fertile eggs which I can incubate inside and later hatch.
Russians are a great breed of tortoise, small, hardy, lots of personality, and (as I found out) don't actually need to hibernate (or brumate, as persnickety tort-people will correct, as torts don't truly hibernate). Once my first Russian came to live with us, and I fell in love with him, I lucked into a couple more, two on Craigslist, one found wandering in a park in Virginia covered in mud, apparently having survived overwintering at the southern end of the mid-Atlantic states (a trick she might not have been able to keep doing for long).
Russians are primarily herbivorous, with the vast majority of their diet comprised of weeds and flowers and other greens. Mine occasionally also eat some squash and pumpkin. In the outside enclosures, I've seen them hunt and eat worms and grasshoppers, but I think of it more as enrichment or supplementation to their diet than an actual dietary need, or staple.
They come from a large geographic area covering much of Central Asia. It's disputed among taxonomists, but many tortoise-folk talk about three sub-species of among Russian Tortoises; I believe that I have representatives of all three in my creep. In 1968, a number of Russian Tortoises were among the first living things to travel from the earth to the moon and back again, aboard the Russian Zond 5 mission.
I now live with four Russians, one male and three females, which many of the keepers and online sources I've accessed in my research feel is an ideal creep of Russian Tortoises as it spreads out the aggressive and continuous mating behaviors of the male among the three females and helps to prevent bullying if the females live together (as mine do).
All four of them came to me as adults, which is different than Darwin and Aretha, who came as hatchlings. 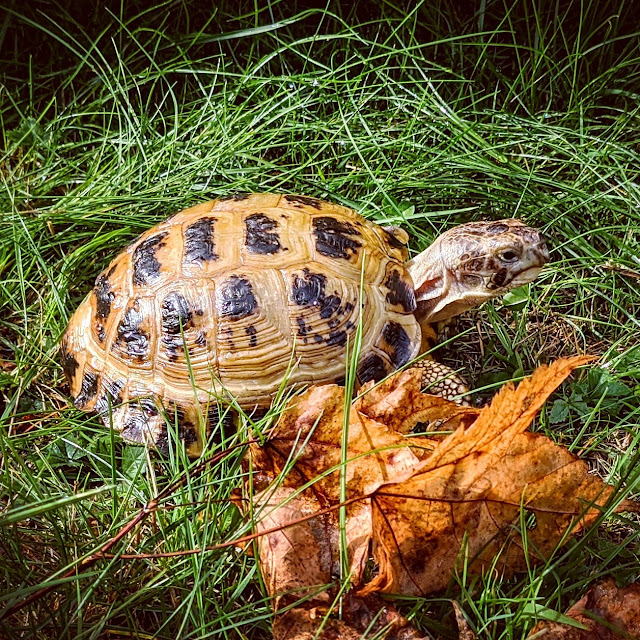 Chili was the second tortoise, and the first Russian, to come and live with me. He'd been living in a ten-gallon Tupperware container, under a spot light, eating just romaine lettuce, for 20 years. He was thin and malnourished and lethargic when he first arrived. He spent a lot of time out on my lawn in a pen I made for him, enjoying the sunny days and an endless stream of hibiscus flowers. He's about the size of a quarter-pounder, weighs about a pound, and has essentially reached his maximum size.
I believe that Chili is of the sub-species Testudo horsfieldii horsfieldii, which are known for being domed and nearly as wide as they are long. 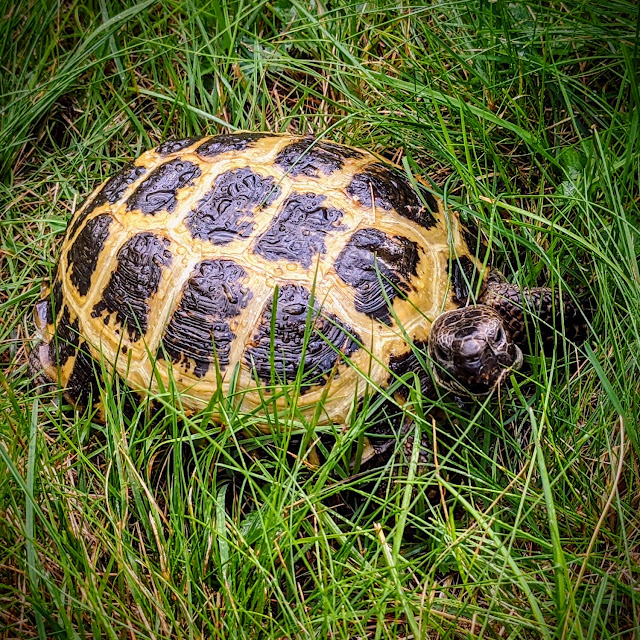 Persephone was found by member of a tortoise forum I participate in wandering in a park in Virginia, and I offered to take her in. She'd a big girl, the largest of my Russians by a sizable margin, and she's done well since joining our creep. When she first came, she slid along the ground, pushing her shell along with her back legs instead of lifting up off the ground as tortoises usually do, but with good nutrition and lots of space to wander and strengthen her legs, she now moves around much better.
I believe that Persephone is of the sub-species Testudo horsfieldii kazachstanica, which are known for being flat and nearly as wide as they are long. 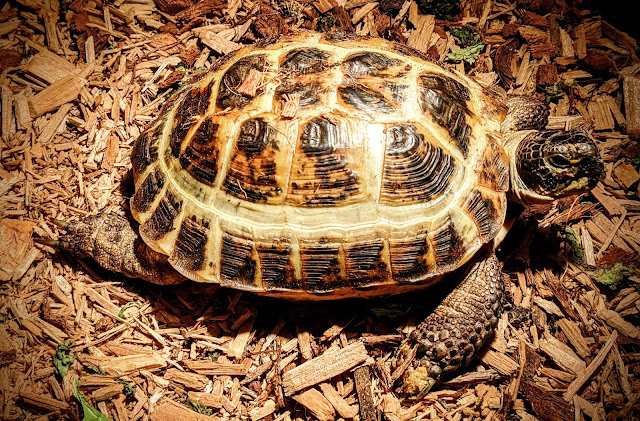 Wilhelmina was found on Craigslist, just about 10 miles from where we all live now. Her previous family had called her William and kept her in a too-small enclosure and allowed her to be bitten by their dog a few times, but besides that, she was in generally good health. She adapted quickly to life in the Westmoreland Creep.
I believe that Wilhelmina is of the sub-species Testudo horsfieldii rustamovi, which are known for being domed and longer than they are wide. 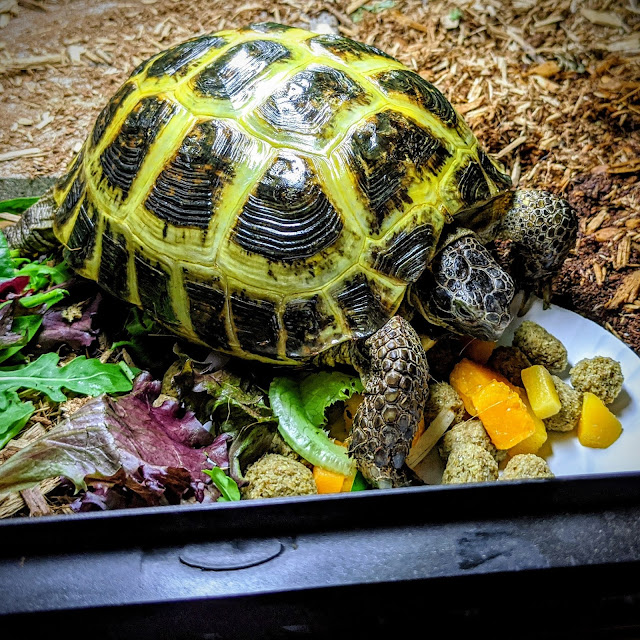 Bertha is the most recent, and likely final (for now), addition to the creep. Although she has some scarring from a run-in with a dog at some point in her past, it was evident that her previous family cared deeply for her; they did the best that they could for Bertha, but financial difficulties related to Covid-19 forced them to seek out another home for their tortoise. She's currently in quarantine, likely for 60 days, before she'll hopefully join the other two female Russians.
I believe that Bertha is of the sub-species Testudo horsfieldii rustamovi, which are known for being domed and longer than they are wide.
Creepy Conclusions
It's been a fascinating journey, getting to know all six of the tortoises that I live with; I've really enjoyed the research and work involved in finding out under what conditions they would thrive and trying to establish those for them here New Hampshire. One of the biggest surprises for me has been how different they all are, even the individuals of the same breeds each have different preference, habits, moods, etc. I'm still just getting to know them all, and they're getting to know me, but we've got plenty of time.
Email ThisBlogThis!Share to TwitterShare to FacebookShare to Pinterest
Home
Subscribe to: Posts (Atom)